30 Years of Being Cut Up 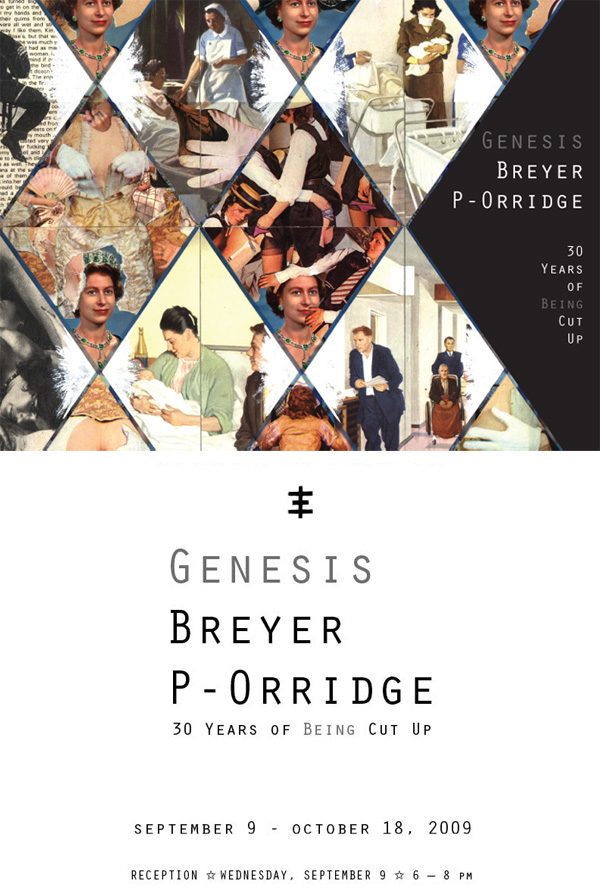 GENESIS BREYER P-ORRIDGE | 30 Years of Being Cut Up

INVISIBLE-EXPORTS is pleased to announce 30 YEARS OF BEING CUT UP, a retrospective spanning three decades of collage work by Genesis BREYER P-ORRIDGE.

As it is, so be it. Genesis BREYER P-ORRIDGE is a true legend of the Anglo-American underground, an avant-garde anti-hero whose remarkable body of work reminds us that what is dangerous and what is important are never far apart—and that, when you believe something, artistic integrity demands that you live by it too. “30 Years of Being Cut Up” draws on collage work from throughout P-Orridge’s remarkable career, demonstrating both the breadth and scope of h/er engagement with a medium that has remained constant throughout h/er life.

P-Orridge first achieved recognition with the 1969 founding of COUM Transmissions, a confrontational performance collective heavily influenced by Dada, which was later transformed into the band Throbbing Gristle. (P-Orridge would, in 1981, found the ground-breaking band, Psychic TV.) By the time COUM disbanded in 1976, it had helped push the boundaries and shatter the definitions of performance and contemporary art, paving the way for later transgressive work. The culmination of COUM was the 1976 “Prostitution” exhibition at the ICA in London, which featured a stripper, used Tampax sculptures, repurposed pornography and transvestite guards, and caused such a commotion that the British Parliament reconsidered government funding for public art and labeled P-Orridge and h/er collaborators “Wreckers of Civilization”—a history documented in a book of the same name by Simon Ford, curator at the Victoria and Albert Museum in London.

In the early 1970s, P-Orridge met William S. Burroughs, who introduced h/er to Brion Gysin, marking the beginning of a seminal and influential collaborative relationship. Burroughs, under Gysin’s tutelage, repopularized the “cut-up” technique of the early 20th century Surrealists, in which text, or narrative imagery, is cut up and re-organized, creating a new, non-linear formulation. The supremely Dadaist practice would influence P-Orridge throughout h/er career and remains an integral element of h/er work, highlighted in “30 Years of Being Cut Up.”

P-Orridge was an early participator in Fluxus and Mail Art, applying the theories of John Cage (upon which the foundations of Fluxus are built) on the pressed recording “Early Worm” in 1968, and exchanging works with Ray Johnson among others. Responding to P-Orridge’s Mail Art, the British General Post Office charged h/er in 1976 with sending “indecent and offensive material” through the mail, including desecrated images of the Queen. (Several of these images appear in this retrospective.) Like many artists at this time, P-Orridge rejected market-driven work, choosing instead to maintain an artist-centered creative nucleus in which work was shared within a community, and was never intended to enter the commercialized art world. P-Orridge later began an occultist practice influenced by the theories of the artist Austin Osman Spare. The “sigils” they performed explored the relationship between the conscious and unconscious self through magical techniques such as automatic writing, drawing and actions, relics of which can be found in many of P-Orridge’s collage work.

In the 1990s, P-Orridge began a collaboration with the performance artist Lady Jaye Breyer, which focused on a single, central concern—deconstructing the fiction of self. Influenced again by “cut-up” techniques and frustrated by what they felt to be imposed limits on personal and expressive identity and on the language of true love, P-Orridge and Lady Jaye applied the strategy of “cutting-up” to their own bodies, in an effort to merge their two identities, through plastic surgery, hormone therapy, cross-dressing and altered behavior, into a single, “pandrogynous” character, “BREYER P-ORRIDGE.” They embraced a painterly, gestural approach to their own bodies, making expressive and startling use of signifiers like eyebrows, lips, and breasts, in order to resemble one another as much as possible. The work was an exercise in elective, creative identity, and a test of how fully two people could integrate their own lives, bodies, and consciousnesses, a symbolic gesture towards evolution and true union. (Although Lady Jaye passed away in 2007, the project continues with Genesis embodying the entirety of BREYER P-ORRIDGE.)

“30 Years of Being Cut Up” is a three decade retrospective of photomontage and Expanded Polaroids, which includes many works never exhibited before, as well as a sampling of P-Orridge’s early Mail Art. The show will mark the culmination of a new, re-emergent phase in BREYER P-ORRIDGE’s life. He/r career — and most particularly he/r recent pursuit of pandrogyny — tests the limits of transgression and traces the tragic fate of the underground, proving again the expressive power and pervasive influence of those artists who take the world not as it comes to them — sensible, orthodox, predictable — but as they would like it to be.

A CATALOG IS AVAILABLE.