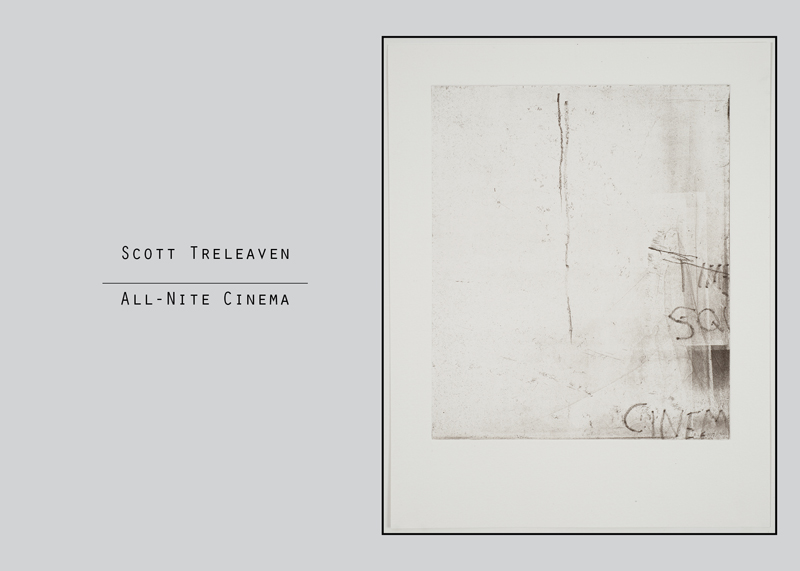 INVISIBLE-EXPORTS is pleased to present Scott Treleaven’s All-Nite Cinema, his second solo-exhibition at the gallery.

All-Nite Cinema is predicated on the idea that drawing is a medium that never “ends”— unlike film with its fixed arc, or the object fetish itself-ness of painting, drawing always points elsewhere, promising meaning outside of the work. Projected into marginal space, glanced sidelong, here Treleaven returns us to the domain of true marginal cultures — sexual outlaws, fringe religions, psychedelic explorers and ritualistic communities — in which all practice is not immediately visible, acceptable, or available; in which meaning is hidden in order to be continually uncovered.

In Jun’ichirō Tanizaki’s In Praise of Shadows, the author describes how certain Japanese artifacts (both religious and commonplace) were meant to be seen in subdued, indirect lighting, not the incandescent glare that characterizes more Western interiors, and how harsh lighting destroys their inherent nuances; in Huysmans’ À rebours, the character Des Esseintes discovers that a sensually colored room, painted by candlelight, became gaudy and uninviting in the light of day. And certain psychedelics, we learn from Terence McKenna, cannot function when ingested because they’re broken down immediately by the body’s defenses—other conditions have to be met prior to their absorption. These sorts of preconditions, Treleaven suggests, also apply to the absorption of certain kinds of information.

This exhibition features large-scale, multi-panel, mixed-media drawings, including a triptych that is the artist’s largest work to date. Within the intimate scale of the gallery, the work consumes the wall, heavy black squares shot through with flares of color; a chromatically inverted cinematic projection. These new works extend the inquiry into the power of hidden meaning Treleaven initiated in his 2011 show, The Holy Man Who Drank Milk With His Penis, making a new and paradoxical step deeper into abstraction and occlusion by embracing and repurposing lessons learned from his work as a filmmaker. The quadtych Do You Have to Have a Body? was created on a long strip of cardboard, beginning with a layer of gestures and colors, then rotated and worked on in all directions, so every angle is given aesthetic cohesion. The last layer is a stylized phrase, an acknowledgement of the gestural similarity to language and automatic-writing. The sheet is then cut-up and re-arranged, each individual panel worked on again to create an aesthetically complete image able to be read from any angle.

Widely recognized for his explorations of subcultures, Treleaven departs from the paradoxical code of explicitness that guides so much esoteric work, turning instead to the textured opacity of abstraction to approach his themes obliquely—not to rescue marginality into public view but to honor it by keeping it secret and strange. His commitment to the principles and models of fringe culture arises from his intuition that these structures require immersive, rather than passive, participation—that they create institutionally complete structures unto themselves and as such tend to provide great insight into the mainstream structures they appear to oppose. As the anthropologist Michael Taussig has argued, those living at the periphery of any mass culture obtain by their very marginality a critical vantage point on the culture itself. Living on the margins is not a way of hiding but of seeking, and seeing.