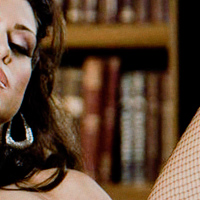 MICKEY SMITH | Believe You Me

We trust books—just don’t ask us to read them.

The second solo exhibition of work by Mickey Smith is a multi-media inquiry into the use of books as symbols of intellectual status in popular culture. In the found, restyled and original images that make up her critical series Believe You Me, shelves of indistinct books are used as backdrops — in some cases simply painted curtains — to perform a signaling function and confer a measure of erudition within a particular kind of aspirational portrait. But what signaling value can such images of books truly have, if they work the same way behind Martin Luther King as they do behind a porn star or a war criminal?

Believe You Me is an exercise in exuberant appropriation art that functions, too, as an elegiac lament over the loss of standards and customs that govern our use of culture, and the two-dimensional works gathered here trace the shape of that unfortunate decline. In her suite of re-photographed midcentury portraits, drawn the Picture Collection of the New York Public Library, Smith pays a kind of reverent tribute to the subjects, radiant dignitaries whose presence seems to shine on the books behind them as much as, or more than, vice versa. Working with found photographs of more contemporary figures, Smith is more whimsical and cutting, cropping the portraits and screen-stills to highlight the stagecraft absurdity—and subverting, pointedly, the emanant power of the book. And in a final large-format photograph, she delivers a second-order trompe-l’oeil send-up, documenting at a coroner’s remove the flat and generic library curtains designed to be hung behind those seated for somber portraits at local photography studios, ad-hoc school photo days, and Wal-Mart portrait stations alike.

The most subtle and powerful work in the show is entitled In Memoriam. A installation composed of 835 legal journals, the work blocks the gallery, forcing visitors to stand on the books themselves. They serve an apt metaphor for our complex relationship with printed material. The books hold us up, serve as our foundation, yet there is a certain desecration implied by walking upon them.

In her previous body of work, Volume, Smith photographed library-stack sets of bound periodicals to memorialize those shared objects of a common literary culture, now passed. In Believe You Me, she examines the manner in which books and book imagery continue to deliver status even in a culture that has turned away from reading—indeed even more powerfully, and more pervasively, than in eras that had not yet given up on the book as a storehouse of knowledge and wisdom. In these contemporary images, books have become vacant props, drafted into private battles and culture wars out of a desperate nostalgia for the fading power of the written word.

Mickey Smith (b. 1972 Duluth, MN USA) received a BA in Photography from Minnesota State University, Moorhead in 1994. Smith has received the McKnight Artist Fellowship for Photography as well as grants from Forecast Public Art Affairs, CEC ArtsLink and the Lower Manhattan Cultural Council. She has exhibited in New York, China and Russia. In 2010, her work was selected as one of the 40 best permanent public art works in the United States by the Americans for the Arts.