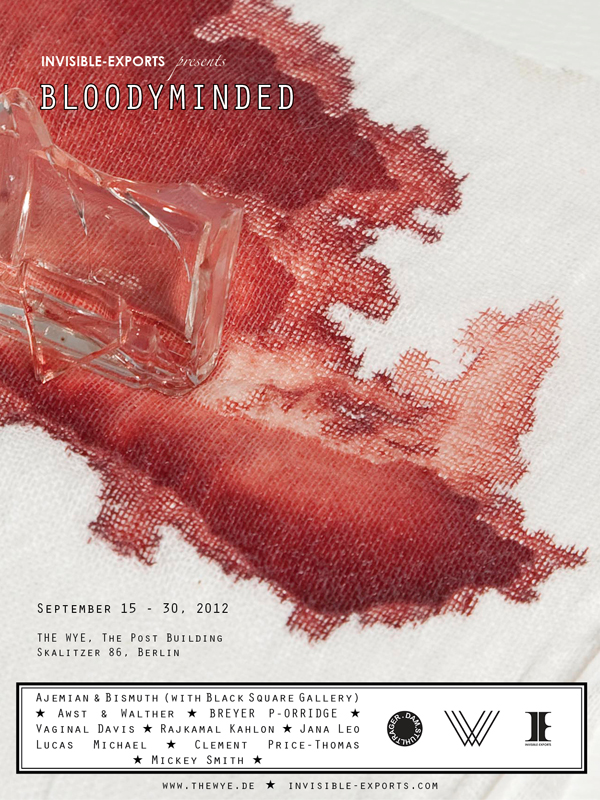 Blood is a universal but clandestine currency, appearing in contemporary life always as metaphor or behind a sanitary veil—as invocation to nationalism, appeal to family, surrender to genetic determinism and declaration of identity. But the eight artists in this exhibition dare to work with blood in much messier and less resolved ways—deploying it as reluctant medium, mercurial subject, vessel of personal memory and tool of reinvention. In other words, as blood—not as equity but a language, even an open-source one.

The work presented here also offers, therefore, a revisionist account of the conventional story of blood as scourge—as disease, as fear, as precious (and vulnerable) commodity in an age of sexual terror and medical shortfalls (and shortcomings). Even amidst anxieties sexual, medical, and political, blood can be virtue, and needn’t be hoarded in the name of preservation or compulsive health. Perhaps it is richest when shared—or commingled.

Awst & Walther are a collaborative duo since 2006. They are based in North Wales and Berlin. Manon Awst (b. 1983, Wales) and Benjamin Walther (b.1978, Dresden), have shown at Junge Kunst (Wolfsburg), Kunstraum Aarau (Switzerland), Künstlerhaus Bethanien (Berlin), Nassauischer Kunstverein (Wiesbaden), Cass Sculpture Foundation (Goodwood) and the National Museum of Wales (Cardiff).

Black Square Gallery: Coming from the critique of a city in transformation, of truly utilizing public space, we propose the minimal black space for a macro experience. Indicating the micro-politic relations of coming and going, we use the black felt as demarcation of a place of liberty, where there is a play between in and out, forming a small kingless nation. The Black Square Gallery rescues the nomad origin and extrapolates public space, generating subjective possibilities towards the understanding of common territories. We play with transience and do not adopt any connection beyond one day. We affirm the orphan unfolding of every action in order to undo whatever relation of perpetual productivity; we intend to contribute to an audience distortion. Against this current spatial crisis, in which legitimating spaces end up becoming a territory market, man has dominated the entire Earth and even the moon. Therefore, the myth of private property takes place in the creation of order towards territory. Upon a black felt on the floor, we reallocate the customary meanings, heading towards a temporary disorder of meaning produced amidst the chaos of the city. The works of the artists blend with a landscape with no horizon for an audience of pigeons and pirates.

Genesis BREYER P-ORRIDGE (born in Manchester, England in 1950) was a member of the Kinetic action group Exploding Galaxy/Transmedia Exploration from 1969-1970. S/he conceived of and founded the seminal British performance art group Coum Transmissions in 1969. Her work has been exhibited at The Tate Britain, the ICA London, The Serpentine Gallery, London, the ICA Philadelphia, the Musee D’Art Moderne, Paris, among many others. Her complete archives are part of the Tate’s permanent collection. Lady Jaye BREYER P-ORRIDGE (born in Brooklyn, New York in 1969) was a practicing nurse, dominatrix and vital member of the East Village performance scene of pre-millennial New York. Genesis BREYER P-ORRIDGE is represented by INVISIBLE-EXPORTS, New York.

Rajkamal Kahlon is an interdisciplinary artist based in Berlin whose practice centers on the social history of painting and drawing. Her work enacts a careful interrogation of the boundaries and the assumptions which form traditional media. This interrogation is made along the fault lines of colonial histories, pre- and post-independence, and the globalized present. Her work, approaching the mediums of painting and drawing from a conceptual and material standpoint, often confronts the viewer with the implication of their own body in the production of meaning.

Jana Leo has an MA in Architecture and a PhD in Philosophy from the Universidad Autonoma de Madrid. Previously, she was a professor at Cooper Union in New York and is now the director of MOSIS Foundation-Models and System: Art and City. Her first show was a series of self-portraits depicting herself as a woman who has been attacked in her own bed – unknowingly opening her career with a subject that will resurface almost fifteen years later. Her videos and interactive installations have been shown in galleries and institutions for over a decade. She currently divides her time between New York and Madrid. Jana Leo is represented by INVISIBLE-EXPORTS, New York.

A native of Argentina, Lucas Michael received his BFA from the Rhode Island School of Design. His work has been exhibited and screened at numerous galleries, museums, and international festivals, including the Getty Center in Los Angeles; Apexart, NY; S.M.A.K. Museum, Gent, Belgium; White Columns, NY and Centro Cultural Recoleta, Buenos Aires. His performance piece No, u didn’t was performed at The Hammer Museum in Los Angeles as part of the Off Screen series. Lucas Michael’s work has been featured in Artforum, Art In America and Frieze. He is co-founder and co-director of Artist Curated Projects (ACP), an artist-run exhibition space. He currently lives and works in New York.

Clement Price-Thomas, an artist based in New York, is the son and grandson of two prominent surgeons. He grew up in a kind of mental operating theater, studying anatomy under his father, pouring over surgical instruments designed by his grandfather. In such a world, he understood early on that not only could life turn on a dime, and therein lied its preciousness, but conversely that nature and the human body held “infinite power and invention.” This dual awareness permeated his thinking ever since, defining a quasi-scientific relationship to art in which experimentation, metamorphosis, and cycles of growth and decay become both metaphor and method.

Mickey Smith (b. 1972 Duluth, MN USA) received a BA in Photography from Minnesota State University Moorhead in 1994. She has received the McKnight Artist Fellowship for Photography as well as grants from Forecast Public Art Affairs and CEC ArtsLink. In 2010, her work was selected as one of the 40 best permanent public art works in the United States by the Americans for the Arts. Mickey lives in Auckland, New Zealand and is represented by INVISIBLE-EXPORTS, New York.