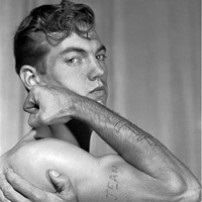 INVISIBLE-EXPORTS is pleased to present Bob Mizer: ARTIFACTS, the New York solo debut of work and objects by Bob Mizer.

In his meticulously staged idiosyncratic private work, Mizer revealed himself as a conscientious artist of intimacy and depth, a visionary stylist of the male-on-male gaze as it was refracted through a culture suffused with masculine iconography, which yet stymied and redirected the vectors of desire. The objects and photographs here show Mizer to be the progenitor of a new kind of devotional work that honors the kaleidoscopic typology of desire in the final stages of the underground era, while approaching it simultaneously as an improvised and mesmerizing ethnography.

Mizer founded the Athletic Model Guild studio in 1945 when American censorship laws permitted women, but not men, to be photographed partially nude, so long as the result was “artistic” in nature. In 1947 he was wrongly accused of having sex with a minor and subsequently served a year-long prison sentence at a desert work camp in Saugus, California. But his career was catapulted into infamy in 1954 when he was convicted of the unlawful distribution of obscene material through the US mail. The material in question was a series of black and white photographs, taken by Mizer, of young bodybuilders wearing what were known as posing straps — a precursor to the G-string.

Upon his release from prison, he continued working undeterred, founding the groundbreaking magazine Physique Pictorial in 1951, which also debuted the work of artists such as Tom of Finland, Quaintance and many others. Models included future Andy Warhol superstar Joe Dallesandro, actors Glenn Corbett, Alan
Ladd, Susan Hayward, Victor Mature, and actor-politician Arnold Schwarzenegger.

The works collected in Bob Mizer: ARTIFACTS include a rare selection of staged tableux, images of California subcultures and an intimate collection of objects from various private sessions – preserved by Mizer along with photographs, films, videos and an ever-expanding catalog of props which over time evolved into a haphazard private museum and a natural history of American desire.