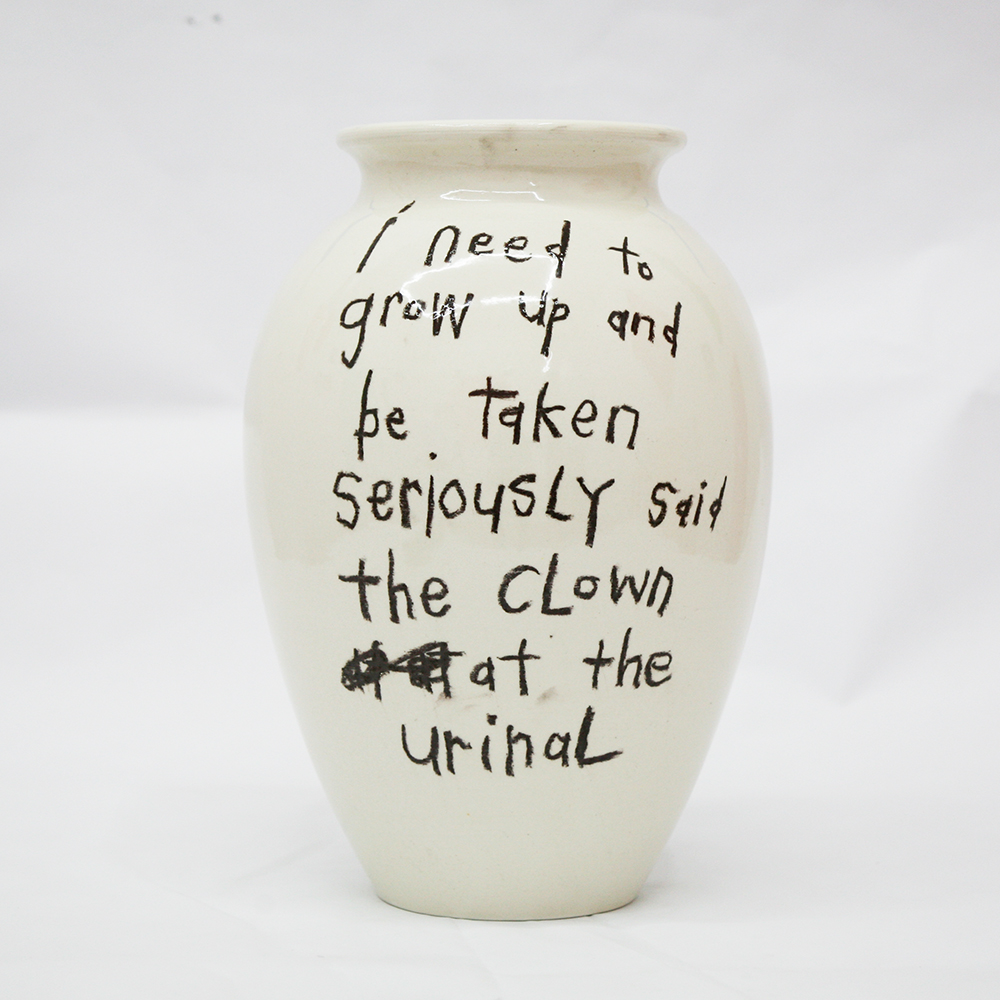 INVISIBLE-EXPORTS is proud to present I Need To Grow Up And Be Taken Seriously Said The Clown At the Urinal, an exhibition of new paintings, new ceramics, and new photo-collages by Cary Leibowitz.

In 2016, at a Los Angeles auction, Cary Leibowitz bought, as a present for his husband, a desk that once belonged to Joan Collins. When the desk was delivered they were delighted to discover, tucked into its drawers, an entire cache of stuff that belonged to Collins—including her wallet and Neiman Marcus credit card. Collins has always been an icon to Leibowitz, but this show — I Need to Grow Up And Be Taken Seriously Said the Clown At the Urinal — is the first oriented towards her presence, with a number of Leibowitz’s iconic text paintings addressing her, especially the idea that what we love about Joan Collins is that she wants to be Joan Collins as much as we want to be Joan Collins. The exhibition will also feature new Americana photo-collages, new text paintings (such as George Washington Redecorates Mount Vernon, Elizabeth Taylor is Thinking About Fried Chicken, Ugh He’s Crying Again, and Respect for the United States Constitution is a Turn On), as well as new ceramic works—the hand-glazed objects Leibowitz has produced periodically throughout his career as a distinctive form, the unique bespoke multiple.

For decades, Leibowitz has been the New York art world’s master painter of abjection and neurosis, self-loathing, self-doubt, and self-interrogation—“like a human dynamo of insecurity,” Rhonda Lieberman wrote in Artforum in 1992. In those years, he was still known as Candyass, a prankster-critic of neo-expressionist grandiosity—and one whose self-mocking good humor belied a universe of anxiety below the surface, particularly as the AIDS crisis devastated New York. He hosted a talk show (Talk Show), appointed himself the director of Fake Chanel (a menorah was a collection centerpiece), became a sort of poster-boy for the Pathetic Aesthetic, and turned sleek, self-important galleries into Candyass Carnivals full of pennants blaring irony, Americana paintings that managed to have it (i.e. the whole American vernacular tradition) both ways, valentines to underappreciated movie stars, and multiples that mocked art-as-commerce even as they were offered, themselves, for sale. His uproarious text paintings of self-lacerating one-liners, typically composed against pastel-colored wood “canvases,” were a self-conscious counterpoint to neo-expressionist grandiosity and the new pop spectacle of the art world of the time (mixing elements of therapy, interrogation, social and institutional critique, and stand-up comedy routine). But his work was also and always deeply personal and idiosyncratic, driven by anxieties, neuroses, and premonitions of difference—and by the nagging of crippling conscience that lies always beneath, or behind, or just around the corner, with a mocking and knowing wink. For I Need To Grow Up, Leibowitz will be throwing a new element of awkward Americana paintings into the mix, including Copley-esque works and butcher signs.

“By making failure, particularly personal failure, his medium and showing particular preference for the lowbrow, the pathetic, the inexpensive, the throw-away,” went the essay accompanying “Cary Leibowitz: Museum Show” (the traveling retrospective that began at the Contemporary Jewish Museum in San Francisco in 2017, moved to Philadelphia’s ICA museum this winter, and will open at CAMH in Houston later this spring), “Leibowitz throws post-modernism’s slick critique of modernism into harsh relief.”

Cary Leibowitz (b. 1963) has exhibited in museums and institutions across the globe including the Institute of Contemporary Art, Philadelphia; The Contemporary Art Museum, Houston; The Contemporary Jewish Museum, San Francisco; The Jewish Museum, New York; the Indianapolis Museum of Art, Indianapolis; PS1 MoMA, New York; to name just a few. His work has been reviewed in the New Yorker, Artforum, The New York Times, Frieze Magazine, Art in America, among others, and is included in the permanent collection of the Chase Manhattan Bank, the Hirshhorn Museum, and The Jewish Museum in New York.