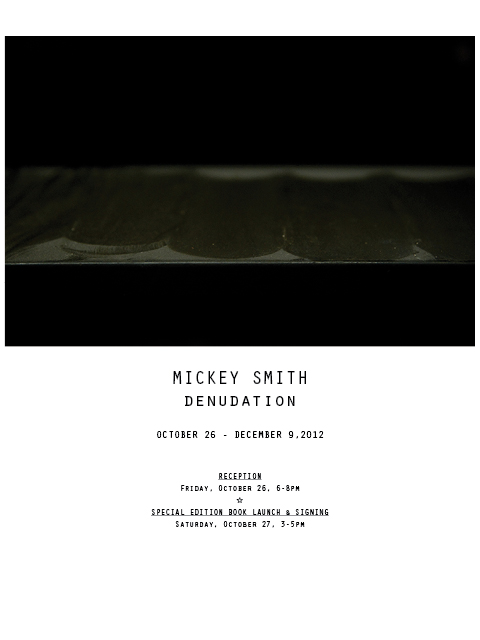 INVISIBLE-EXPORTS is pleased to present Denudation, an exhibition of new work by Mickey Smith, and her third solo show at the gallery.

The palace of memory is re-built again with each walk through. In her new series, Denudation, Mickey Smith presents a mesmerizing kind of in-situ laboratory-style photography—the image as evidentiary document, the print as cold case. The stark, dark photographs in this new exhibition test the limits of objectivity and the false consolation of casualness even as, in the tradition of documentary and crime- scene photography, the images aspire to conscientious neutrality. The photographs document those objects discarded within an abandoned library, but their formal objectivity is no guard against the ghosts of narrative, perceived or imagined.

In her 2008 series, Volume, Smith photographed library-stack sets of bound periodicals to memorialize them as shared objects of a common literary culture, now passed. In Believe You Me, from 2010, she examined the manner in which books and book-learning continue to deliver status even in a culture that has turned away from reading—indeed even more powerfully, and more pervasively, than in eras that had not yet given up on the book as a storehouse of knowledge.

The somber photographs in Denudation are more scrutinous and more skeptical of the broad documentary project. The works, portraits of discarded objects, double as studies of the library as a technology of forgetting—a place where things are discarded and disregarded as much as they are preserved and restored. Included in the new series is 123, a suite of photographs Smith took at age eleven of the implosion of the Northwestern National Bank Building in Minneapolis, Minnesota. In a gesture of self- appropriation, Smith collaborates with her younger self, capturing a moment of transformation from function to memory. The performative act surrounding both 123, and Denudation as a whole, suggest, too, that documentation, in book culture and in photography, may be not just an atavistic, but a failed science—a system of universal knowledge that yields, ultimately, merely a scrap heap of things left behind.

Mickey Smith (b. 1972 Duluth, MN) received a BA in Photography from Minnesota State University Moorhead in 1994. She has received awards from the McKnight Artist Fellowship for Photography, the Forecast Public Art Affairs, CEC ArtsLink, and Americans for the Arts. Smith lives in Auckland, New Zealand and is represented by INVISIBLE-EXPORTS in New York.