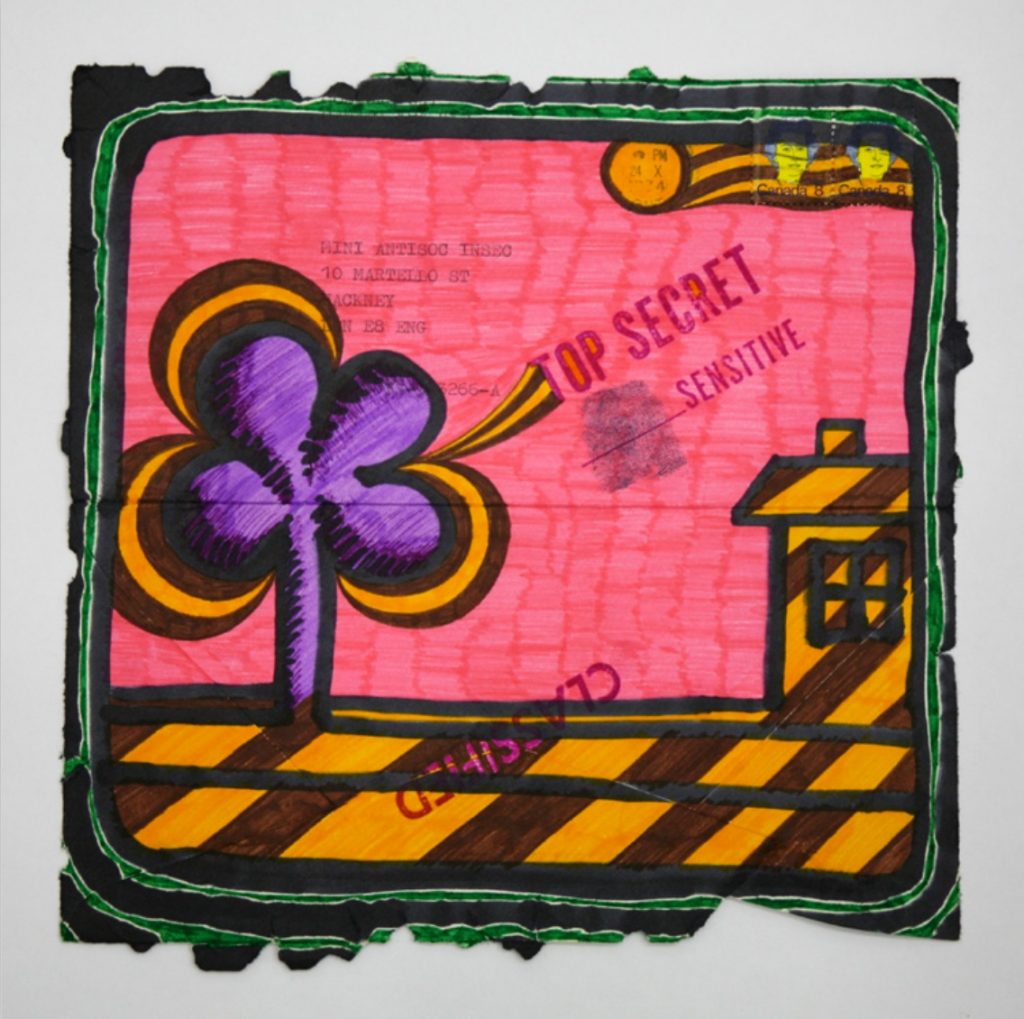 INVISIBLE-EXPORTS is proud to present Tree of Life, an exhibition of never-before-seen archival works by Genesis P-Orridge: a suite of 30 recently discovered magic marker drawings from 1974-1975. This is the fourth show of Genesis’s work at the gallery, and the first built around vintage work since 2009’s 30 Years of Being Cut Up.

Genesis P-Orridge is a legendary, avant-garde visionary, having spent literally a half-century interrogating the malleability of identity. A quick summary of an unsummarizable career: s/he was deeply involved in European Fluxus and the founder of COUM Transmissions (in 1969), the performance collective which spawned Throbbing Gristle (in 1975) whose sound s/he named Industrial Music; conceived of the notorious 1976 ‘Prostitution’ exhibition at ICA London, which had Genesis branded by Parliament a “wrecker of civilization”; a Mail Art pioneer and collaborator with William S. Burroughs and Brion Gysin from 1971 until their deaths in the 1980s; and, beginning in the 1990s, the co-creator of the now-mythic Pandrogeny project, in which s/he and he/r now-late other-half, Lady Jaye, endeavored to merge both their genders and their identities—making their bodies the very vessels of the avant-garde imperative to re-imagine and reinvent the self as one “third being,” a Pandrogyne.

The newly uncovered works date from the last years of COUM, as Genesis was shifting he/r focus more fully to music, collage, and Mail Art. In a sense, these works are Mail Art, too—intricate compositions made on the surface of envelopes, sent to Genesis, containing the Mail Art of others, and meant to be resealed, and sent along to another. In fact, they reveal a quite obsessive personal and inward-looking focus—endless variations, drawn in then-cutting-edge Magic Markers, of the same, repeated, uncanny scene. In each almost-idyllic composition appear three quasi-allegorical elements: a simple, basic home, a stylized cloud, and a fantastical “Tree of Life.” Genesis worked and reworked this scene not in pursuit of some technical self-mastery but out of something much more fundamentally compulsive: an inability to leave behind those visual elements, to which s/he’ll invariably return, even today, when idly doodling. Over time, these elements became a sort of visual calling card for Genesis—incorporated into more elaborate works and even occasionally into experimental forms of he/r own signature “magickal” alphabet. These drawings, discovered earlier this fall and shown here for the first time, are the origin of that infatuation or even fetish—a kind of skeleton key for he/r inner life.

Genesis BREYER P-ORRIDGE was born in Manchester, England in 1950. He/r work has exhibited in museums and galleries across the globe, including The ICA (Philadelphia), The Tate Britain (London, UK); Deitch Projects (New York); The Andy Warhol Museum (Pittsburgh, PA); The Serpentine Galleries (London, UK); MoMA P.S.1 (New York); Mass MOCA (North Adams, MA); among many others. Their archives are part of the Tate’s permanent collection. They are represented by INVISIBLE-EXPORTS, New York.