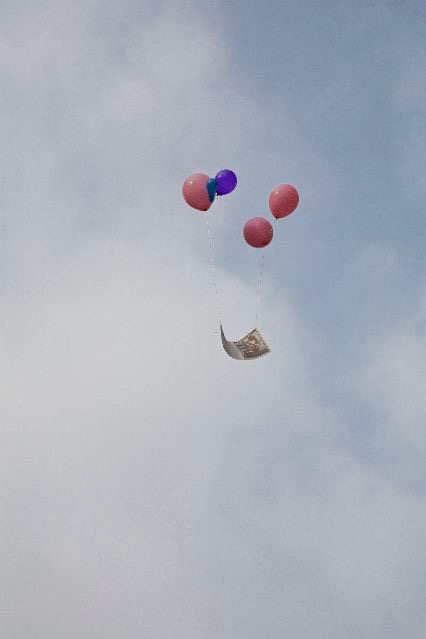 INVISIBLE-EXPORTS is pleased to present, Les Tristes: Invisible-Exports, a collaboration between Lucas Ajemian and Julien Bismuth.

Collaboration is a way of working. It is also a genre, founded on an idea or ideal of authorship.

Dialogue, on the other hand, is a form of interaction, one that has its own ethos and discipline of engagement, in which each protagonist is constantly asked to shift between listening and speaking, proposing and understanding, deciding and complying.

For their first exhibition at Invisible-Exports, Lucas Ajemian and Julien Bismuth are staging a dialogue of or out of sorts. By means of a series of objects, performances, the filming of scenes for a long-standing film project, and a publication, they will engage in an exchange across a frail and blurred divide of authorship. The materials used for this exhibition will be newspaper, glue, water, wire mesh, a mime, newsprint and ink, a printing press, computers and cell phones, and other, miscellaneous and as of yet more or less unknown items. Scenes for the “Les Tristes” film will be staged and shot every week at or within proximity to the gallery. Anyone interested in participating or auditioning for these scenes may contact the gallery for dates and times.

The exhibition ventures to address such topics as: (a.) the immateriality of concepts as an ideal rendered unattainable by the materiality of language, (b.) the ideal of furniture as objects rendered immaterial by our familiar and unconscious relation to them, (c.) the material and yet seemingly immaterial nature of the filmic illusion, (d.) the fallacy of commerce as an end to a means rather than a means to an end, (e.) the irascibility of the avant-gardes, (f.) the difficulty of breaking down language into analyzable units, (g.) the morning papers, (h.) distraction, (i.) manholes, and – perhaps most importantly (j.) the consequences of having an absence of motives being counteracted by a plenitude of impulses.

Lucas Ajemian (1975) holds an MFA from University of Illinois at Chicago. He has had solo exhibitions at Daniel Hug Gallery, Los Angeles; Galerie Parisa Kind, Frankfurt; Kirkhoff, Copenhagen; Moderna Museet, Stockholm; and the Palais de Tokyo, Paris. His work has been reviewed in Artforum, The New York Times, and Flash Art.

Julien Bismuth (1972) holds an MA from Goldsmith’s College, London and is a PhD candidate in literature at Princeton University. He has had solo exhibitions at the Box, Los Angeles; Layr Wuestenhagen Contemporary, Vienna; Institut d’Art Contemporain, Lyon, France; Galerie Parisa Kind, Frankfurt; and Galerie Georges-Phillipe & Nathalie Vallois, Paris. His work has been reviewed in the New Yorker, The New York Times, and Flash Art.

Lucas Ajemian and Julien Bismuth have collaborated on a series of projects since 2005. They have exhibited together at the Galerie Georges-Philippe & Nathalie Vallois, Paris (2008); Galerie Parisa Kind, Frankfurt (2006), the Orange County Museum, Newport Beach, CA (2008) and Foxy Productions, New York (2008).