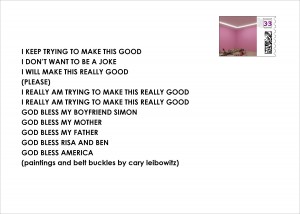 INVISIBLE-EXPORTS is pleased to present Cary Leibowitz’s (paintings and belt buckles), his first solo exhibition at the gallery.

Cary Leibowitz is stressed out. A painter and multimedia artist, Leibowitz presents everyday experience not as objects of reverence but occasions for scrutiny and absurdity—focusing particularly on the tangle of ritual rivalry and casual hypocrisy that surrounds social performance. The works confound and entertain at once, idiosyncratic and inscrutable both, layered with self-loathing but directed outward in search of like-minded communities, however small.

For three decades now, Leibowitz has made phantasmic and trenchant use of a comic persona of querulous self-abasement, with work that mixes elements of therapy, interrogation, social and institutional critique, and stand-up comedy routine. He first came to prominence in the early 1990s, as Candy Ass, a small-is-beautiful prankster-critic of neo-expressionist grandiosity, and enjoyed a New York revival in the early 2000s, as a wry and disconsolate Abject Art witness to the new pop-spectacle of the time. But these are public roles; and while his work demands them, Cary is a private artist, even cripplingly so, his unmistakable work the product of a riveting and consistent practice — driven by anxieties, neuroses, and premonitions of difference — that transforms self-doubt and social skepticism into something much larger than niche art-world critique: a heartrending and intimate meditation on our inescapable secret doubleness, the lacerating, manipulative and above all debilitatingly self-aware conscience that lies always beneath, or behind, or just around the corner, with a mocking wink. Or is it a knowing one?

In his belt buckles, Leibowitz presents, with a “dress-up” or “make believe” accessory, a rococo pre-adolescent view of the adult world—naive mementos forged from the wondrous, theatrical perspective of a child gazing up at those operating and interacting on a plane entirely above his head. Fantastical and autobiographical both, these are sentimental objects—valentines to an imagined and sturdy-seeming social universe one longs to be, but is not yet, a part of. That is, if it is possible to ever encounter that self-assured adult world anywhere outside of childlike fantasy.

The paintings, candy-colored, cheeky text-based canvases, are sly records of arbitrary rigor and anxious restraint—the uneasy effort of controlling and choreographing oneself through environments and interactions governed by rules that seem at least mercurial and unnatural, often impossible to navigate. While the varied and nonstandard shapes of his canvases are a kind of gestural flourish, it is the only one Leibowitz allows himself. His choice of a single consistent color on each canvas and the walls (the same sweet taffy shade of pink), and his use of comic language (the inviolably structured language of sharply formulated jokes, self-mocking gags, and put-downs), reflect an almost desperate program of self-management and self-restraint—qualities that often pass for self-knowledge even though they arise from self-doubt. One may never lose the sense that adulthood is a foreign language, and selfhood a fiction, even as one learns, blunder-by-blunder and crib-note-by-crib-note, how to mimic the first and mime the second. But even in a panic state, Leibowitz says, if you know what works for you, you can’t slip.

For Leibowitz, childlike wonderment and adult anxiety are expressive modes as much as they are stages of growth, perennial gestures to be toggled between as much as snake-skins to be left behind. Abjection is no different—a declaration of morose independence from a self-congratulatory marketplace, a retreat into self-loathing as a break from self-promotion, self-loathing may not be the defeat that our self-help everything-is-sunnily-for-sale culture insists it is, but a vital platform for criticism both within and without. And possibly a perpetual state.

Cary Leibowitz (b. 1963) also known as Candy Ass, is an American artist whose work has shown in museums and institutions across the globe including the Jewish Museum, New York; the Guggenheim Museum, New York; the Indianapolis Museum of Art, Indianapolis; PS1 MoMA, New York; to name a few. His work has been reviewed in the New Yorker, Art Forum, The New York Times, Frieze Magazine, among others, and is included in the permanent collection of the Chase Manhattan Bank, the Hirshhorn Museum, and The Jewish Museum in New York.