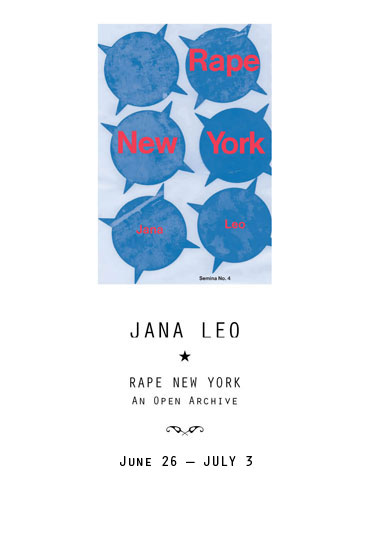 In January 2001, soon after moving to New York, Jana Leo was held hostage and raped during the course of an afternoon in her apartment.

The documents assembled here, seven years in the making, accompany the release of her book RAPE NEW YORK. The archive consists of photographs from her emergency visit to the hospital, police reports, crime scene photographs, notes from her therapist, as well as records from the civil suit and other assorted items and documents related to the rape and the legal case that followed, none of which can be reproduced, or even reviewed without the victims’ consent. The documents are kept in organized boxes to be retrieved by the archivist, not displayed on the gallery walls. The archive is not presented to the visitor; instead, each guest must fully identify oneself (photo ID is required), and request materials from the archivist. This way, the visitor takes responsibility for what’s requested, making private again what was made public by Leo—the latest revolution in a cycle of public and private that began with the rape itself.

It is difficult to talk about rape, and even more so to allow strangers to sift through the private and often disturbing materials. But to Leo, the archive is a necessary investigation into the “disruption of [her] close memories.” RAPE NEW YORK is a raw, deeply personal work, but also a fully public endeavor, in which the artist asks the viewing public to reexamine in clinical detail her own harrowing experience. Leo has censored nothing, and asks the same clear-eyed focus of all archive visitors.

Jana Leo has an MA in Architecture and a PhD in Philosophy from the Universidad Autonoma de Madrid. Previously, she was a professor at Cooper Union in New York and is now the director of MOSIS Foundation-Models and System: Art and City. Her first show was a series of self-portraits depicting herself as a woman who has been attacked in her own bed – unknowingly opening her career with a subject that will resurface almost fifteen years later. Her videos and interactive installations have been shown in galleries and institutions for over a decade. She currently divides her time between New York and Madrid.

RAPE NEW YORK is published by Book Works (UK) as part of their Semina series, selected by Stewart Home.