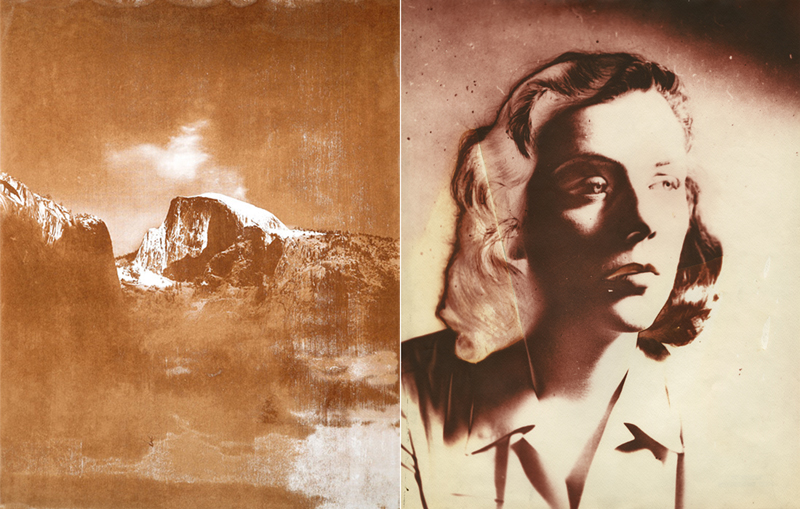 INVISIBLE-EXPORTS is pleased to present The Crystal Chain, a group exhibition coinciding with Blind Spot magazine’s issue 45, both organized by Matthew Porter and Hannah Whitaker.

The Crystal Chain takes its name from a correspondence between artists and architects about utopian architecture initiated by Bruno Taut in 1919. Though this exchange predates the photographs shown here, it embodies the struggle of intellectuals in the early part of the twentieth century to get their ideological footing, and in particular to define a future for their medium.

In the broadest sense, the works in this show take their cues from history. Less decisive moments than summits of accumulation, these photographs show the cyclical reprocessing of the past and its reincarnation in the present.

Many of the exhibiting artists operate in the mode described by Hal Foster as the “archival impulse.” The works are investigative in spirit, focusing on specific resonant events. As Foster puts it, they “seek to make historical information, often lost or displaced, physically present.” Here, they tackle head-on the paradoxical impulse to explore the past through a medium that necessarily captures the present. Tacita Dean, a pioneer of the archival mode, photographed the dilapidated remains of the trimaran Teignmouth Electron, in which amateur seaman Donald Crowhurst made his fatal effort to sail around the globe. Seen through photographs, the ship is mute, but stands totemic of both Cromhurst’s tragic tale and Dean’s investigation of it.

Other works in the show, such as those by Shirana Shahbazi, Phil Chang, Kate Costello, and John Houck, are connected to the past through strategy rather than content. They represent the collapsing of traditionally segregated photographic approaches—the deskilled Conceptualism of the ’60s, the formalism of midcentury modernists, the fluid observation of the journalistic-minded, and the material experiments of the Bauhaus. From the standpoint of the contemporary photographer, these distinctions can feel antiquated, with richer generative potential found in recombination.

Included are a few historical photographers: Eliot Porter, Ellen Auerbach, and Josef Breitenbach. They’re connected to one another and to living artists less through direct influence than through spheres of association, articulated by shared interests and personal linkages. For example, Breitenbach photographed Bertolt Brecht, who figures in the work of Gerard Byrne, who is friends with Joachim Koester and shares an interest in restaged trials with Boru O’Brien O’Connell. Auerbach also photographed Brecht and was friends with Porter, who made long-lensed landscapes not unlike those of Torbjørn Rødland, who recently made double exposures reminiscent of Breitenbach’s material experimentation of the ’30s and ’40s. Porter also made tightly composed bird photographs (involving a process that Auerbach documented) whose formal simplicity echoes Erin Shirreff’s photographic reinterpretations of Tony Smith sculptures. And so on.

Photography is used here mostly as an art form, one referring back to various twentieth-century strains, but also a little as documentation—evidence of having been in the presence of something or someone. Because taking someone’s picture means sharing space and exchanging words.