The Holy Man Who Drank Milk With His Penis 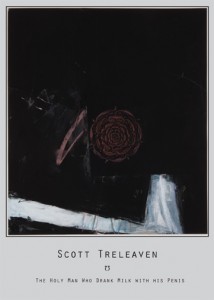 SCOTT TRELEAVEN | The Holy Man Who Drank Milk With His Penis

INVISIBLE-EXPORTS is pleased to present The Holy Man Who Drank Milk With His Penis, a solo exhibition of new works by Scott Treleaven.

Some things must be hidden to be found. In his new work, the first to embrace total abstraction, the celebrated Canadian collagist, filmmaker, and multidisciplinary virtuoso Scott Treleaven has subsumed his social- and self-critique into a suite of mesmerizing works on paper at once assertive and mysterious. In The Holy Man Who Drank Milk With His Penis, which takes its name from an obscure yogic practice for cultivating extreme self-control, Treleaven departs from the paradoxical code of explicitness that guides so much esoteric work. Rather than making public or even monumental the semi-ritualized struggles of marginalized individuals and communities, Treleaven uses the opacity of abstraction to deal with these themes obliquely, through obscuring veils—not to rescue marginality into public view but to honor it by keeping it secret and strange. Sometimes the most direct approach involves no path at all.

Treleaven first became known as the founder of an underground “queercore” movement, which was designed to dissolve in a fit of self-criticism, and for leading it to that willful dissolution through self-interrogation in the handmade zine and film ‘The Salivation Army.’ The two impulses remain imperative: he is an ardent advocate for the socially transformative power of marginal cultures (occultism, esoterica, collage, punk aesthetics) as both participant and critic.

In his new work, Treleaven expands the expressive boundaries of his practice, exploring new emotional terrain by combining his own unique personal history and lifelong study of the artifacts of marginal culture with the exploration of more traditional materials and methods: rather than romantic collage and video, now we find more intimate, stern, even uncanny drawings; rather than representational, pedagogic depictions of ritual, now enthralling abstraction with the ritual embedded in process; in place of the pastiche spirituality of disassembled commodity culture, now an effort to transform those ideas made overly familiar through images and genre repetition into something much more peculiar, vibrational, even homeopathic. In a bold complement to previous work that embraced esotericism as a kind of teaching, Treleaven has turned to the gesture, the incontrovertible mark on paper, and allusions to automatism and automatic writing as way to explore and interrogate those things forgotten or obscured in an era deluged by mediated opinions and endlessly cumulative consensus imagery—and yielding stunning meditations on mortality, intuition, the exigencies of the present, and transcendence. In doing so, he suggests a path out of the paradox of esoteric art, that figurative treatment may betray private practice, and offers instead an approach to secret knowledge at once flirtatious and Victorian, hiding content to revive the pleasure, and the meaning, of its rediscovery.

This new work is no less preoccupied with subcultures and hidden histories, but is now marked by fascinating nonrepresentational flights of color, gesture and form. In his acclaimed 2010 ‘Cimitero Drawings’ exhibition Treleaven brought dynamic expressionist elaborations to his collaged photographs of Milan’s Monumental Cemetery. In this new series of drawings, Treleaven buries his trademark collages, blacking them out with heavy applications of paint and pastel, so only the faintest outline of the photographic image remains—the imposing, almost brutalist structures giving way to swaths of electric color and line. At once visceral, immediate, mysterious and refined, these drawings are about the stuff of marginality itself—literally, what happens on the very edges or fringes of a structure. The disruption is done symbiotically: the main structures are never totally lost or destroyed, and the defacing marks resolve into positive forms, each work a map of haphazard balance both improvised and total.

Scott Treleaven was born in Canada, in 1972. His drawings were recently included in the popular Mapplethorpe group exhibition, Night Work, at Alison Jacques Gallery, London, and the Weatherspoon Art Museum Art on Paper Biennial, North Carolina. Other exhibitions of note include: Male, Maureen Paley, London (2010); Cimitero Drawings, Marc Selwyn Fine Art, Los Angeles (2010); Silver Make-Up, The Breeder, Athens (2009); Where He Was Going, John Connelley Presents, New York (2008); and the Biennale de Montreal (2007). Most recently, a program of his films was presented at the Museum of Modern Art in New York. His work has been featured in Artforum, Frieze, The New York Times, and Interview Magazine, among others. Treleaven lives and works in Paris, France and Toronto, Canada.