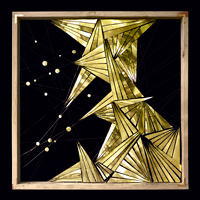 INVISIBLE-EXPORTS is pleased to present The Protective Motif, the first solo exhibition of artist Walt Cassidy.

Walt Cassidy’s works are a personal alphabet—each piece charting a private topography of history, experience, emotion, and thought. The Protective Motif is a survey of that inner landscape, rendered in a visual language both intimate and arcane. Ranging from ink drawings and wall sculptures to photographs, the work testifies, with remarkable emotive force, that the most demanding affective experience is often the private one, and that our most urgent expressive imperative is to render it sensibly—to make outer order from inner chaos.

The works in The Protective Motif compose a meta-narrative across medium and are rooted in childhood exercises, learned from his father, an industrial psychologist. These physical meditations were used to ground the neurological electricity of the brain, by doing such things as burying ones hands in soil (modeled on the analeptic structure of the lightning rod). The pieces gathered here act as maps that trace the contours of private experience, constructed on the basis of a therapeutic autobiographical agenda through the transformative ritual of re-experience.

Cassidy places his faith in these constructions, which invoke again and again the varied symbolism of the “protective motifs”—repeated ideas, patterns, images and themes, which serve as the physical bedrock upon which he extricates himself from his personal experience.

In the introductory suite of photographs, The Inferior Orbs (2006), Cassidy reconceived, as a personal cosmography, the map of the universe sketched by John Milton in his Paradise Lost—a series of circles chart the paths between heaven and hell. These photographs act as a template, both formally and conceptually for Cassidy’s other work. The most recent sculptural series is centered on the work Nail Bomb (2009), which illustrates a field of fragments wired together in an ode to his personal emotional surrender.

Walter Cassidy lives and works in New York. He has exhibited at MASS MOCA, Paul Kasmin Gallery, and Deitch Projects.