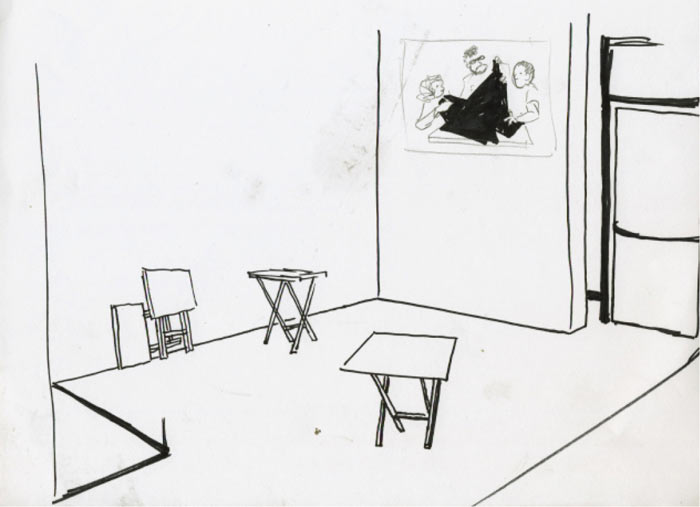 (A series of two rooms, connected by a smaller intermediary space. The rooms contain several TV tray tables, some framed texts, a video, newspapers, and large letters painted on white foamcore sheets. Muffled sounds emanate from the basement. A houseplant wilts by the side of a radiator.)

L: …so that the tables themselves are less actual pieces of furniture, than something between an ideogram and a… a…

J: A pictogram? A performer? A video still? An idea of or for an object, I mean of or for what an object could or should…

L: Did you bring a camera? I can’t seem to find the footage of the trumpet player. I wonder if the tables adequately convey the quagmire in which we resolutely entrenched ourselves in order to produce them, or rather, in order to make them as productive as they were of questions and difficulties and… I dislike the word “issue,” but I am tempted to use it here.

J: (softly burping) Things are only ever overplayed if one wants them to be. The tables are outlines for conversations, the conversations are placeholders for an indefinitely dilatable exchange, the video is a trail or a trailer for a film that we have only ever described as a horizon. As for the letters, I would qualify them as target practice. You and I are letters in a sentence that is being rewritten by the undifferentiated hands of pleasantly distracted participants. I had wanted to scribble something on the wall, but the only thing that comes to mind is a mildly obscene acronym.

L: The light is falling as we speak, what is there left for us to do here? Where have we put the tape? The tape measure? The hacksaw?

(The light fades in the space. The door narrows and comes to a close. Somewhere, far off in the distance, a car starts then comes to a screeching halt. Their phones ring as they pick up their coats and make their way to the back of the space.)

INVISIBLE-EXPORTS is pleased to present Walks & Talks, the second exhibition at the gallery by the collaborative duo Lucas Ajemian and Julien Bismuth.

The collaborative duo Lucas Ajemian and Julien Bismuth can’t stop talking to each other. Their shared practice revolves around the concepts and conceits of collaboration and dialogue. Their first exhibition at the gallery, Les Tristes: INVISIBLE-EXPORTS, explored — through correspondence original, found, and repurposed — the blurred and frail line of authorship and the legacy of avant-gardism for an era so enamored of vanguard gesture it leaves no room for real transgression. In the exhibition presented here, comprised of performance and conversation directives — letterpresses and jointly-made objects — Ajemian and Bismuth present a kind of suffused, semi-secret record of discussions and conversations about art making, conducted not just with each other but with a series of unwitting participants—friends, rivals, mentors, protégés, and interlocutors, drawn into dialogue with Ajemian and Bismuth over the last few months.

Strewn across the gallery are reconstructed tv trays, conceived and built jointly by Ajemian and Bismuth not as single-diner contraptions and emblems of American loneliness, but as new gathering-points for interaction and participation—the classroom desk of the American living room. The solipsistic iconography of the classic suburban American object, one that aids and participates in the consumption of both food and popular culture, fits nicely within an art practice that revels in duality, double-entendres, and humor. It’s a prop that props up.

Paired with each tv tray is a letterpress, identifying a performative or intellectual action; one that defined the discussion between Ajemian, Bismuth, and one of their new collaborators, and which extends the promise of collaboration to the viewer, too.

The final component of Walks & Talks, is a self-imposed video retrospective, in which Ajemian and Bismuth crash and smash documentation from their Les Tristes performances, the conclusive tribute to a practice dedicated to the exchange of ideas.

Lucas Ajemian (1975) holds an MFA from University of Illinois at Chicago. He has had solo exhibitions at Daniel Hug Gallery, Los Angeles; Galerie Parisa Kind, Frankfurt; Kirkhoff, Copenhagen; Moderna Museet, Stockholm; and the Palais de Tokyo, Paris. His work has been reviewed in Artforum, The New York Times, and Flash Art.

Julien Bismuth (1972) holds an MA from Goldsmith’s College, London and is a PhD candidate in literature at Princeton University. He has had solo exhibitions at Emanuel Layr, Vienna; Simone Subal Gallery, New York; the Box, Los Angeles; GAK Kunstverein, Bremen, Germany; and Galerie Georges-Phillipe & Nathalie Vallois, Paris. His work has been reviewed in the New Yorker, The New York Times, and Flash Art.

Lucas Ajemian and Julien Bismuth have collaborated on a series of projects since 2005. They have exhibited together at Galerie Parisa Kind, Frankfurt (2006), the Orange County Museum, Newport Beach, CA (2008), Foxy Productions, New York (2008), and the ICA Philadelphia (2011).