A Project by Philip von Zweck 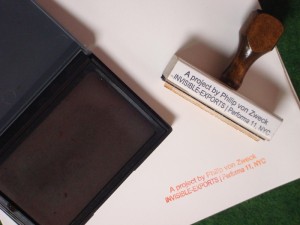 For this performance, von Zweck recruited a wide range of artists to each produce a work for display with the understanding that these pieces are not for sale. Instead, they are master-copies waiting to be printed. At the request of any gallery-goer, a work will be taken and copied in an on-site photocopier. Each copy will be stamped, numbered to ensure its authenticity, and then given to the person who requested it. The prints are free, and the print run is limited to the total number given out for the duration of Fluxus Weekend.

Philip von Zweck is a painter and artist who lives and works in Chicago, IL. He has had solo exhibitions and projects at Medicine Cabinet, threewalls, The Museum of Contemporary Art, Gallery 400, among others, and has appeared in numerous group exhibitions across the country and internationally. From 1995-2010 he produced a weekly radio program “Something Else” on WLUW in Chicago, and from 2005-2008 he ran the gallery, VONZWECK, out of his living room. He was the recipient of the penultimate Richard H. Driehaus Emerging Artist Award. He had a solo exhibition of paintings at 65GRAND in July of 2011.