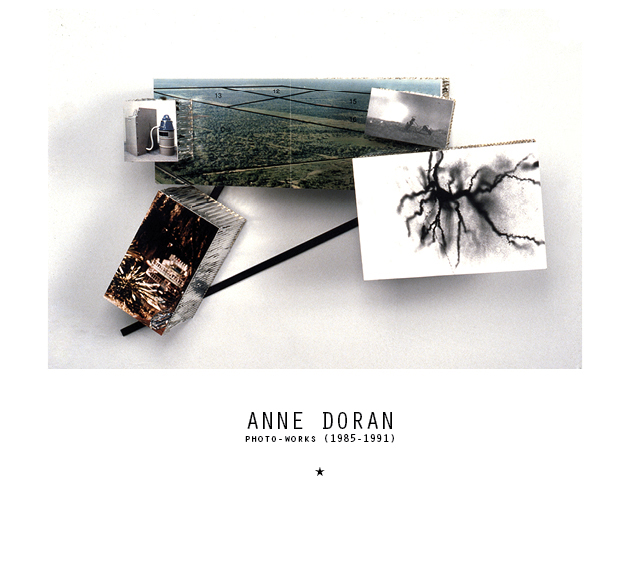 INVISIBLE-EXPORTS is proud to present the first solo exhibition at the gallery of work by Anne Doran.

From 1985 through 1991 Anne Doran made slyly narrative wall-based sculpture from appropriated public images in wide circulation, using them to speak of the commodification of desire, the loss of self, and the dynamics of power relations in modern culture.

One thing we know about the flood of culture is that it only accelerates and accumulates, expands and appropriates. We know it about the late 1980s and early 1990s especially, an era in which the total conquest of dream-life by the media seemed finally and totally achieved, but which seems now, from the vantage of the image-obsessed-and-overwhelmed perch of today, just the beginning. Un-exhibited for more than two decades, Anne Doran’s contemporary mixed-media works navigate the space and time between the two, marvels of inflected prescience that seem to live in both this era and that: visionary maps of internet logic produced before the internet came of age; pre-histories of our post-culture future; and poignant heirlooms of those subcultures promising oblique threats to mass media, threats we now see as private but profound protest.

Doran’s work largely consisted of large-scale photograph-and-aluminum wall-reliefs based on collages of appropriated pictures sourced from porn magazines, corporate reports, advertising circulars, and military periodicals. Fragmenting and recombining these images in free-associative fashion, Doran re-deployed their fetishizing treatment of objects and bodies and their conflation of different sorts of desire—for sex, for commodities, for lifestyles, for power—in new, open-ended narratives, both personal and political. While indebted to the appropriation strategies of an earlier generation of artists, these works also anticipated the contemporary experience of images in which context is the only content. And yet, they remain artifacts, too, of the era on the other side of that threshold, when the project to master the coded narratives of consumer culture had not yet been made to seem, by a new flood of media, impossibly quixotic; and when it still seemed possible, in a sea of images, to make a personal and idiosyncratic claim.

Anne Doran (b. 1957) was born in Canada and lives and works in New York. Her work has been included in exhibitions at MoMA P.S.1, Long Island City, NY; The Kitchen, New York; Artists Space, New York; the Centre Georges Pompidou, Paris; Tony Shafrazi Gallery, New York; the Stedelijk Museum, Amsterdam; the New Museum of Contemporary Art, New York; and 303 Gallery, New York and has been reviewed in the New Yorker, the Village Voice, and Flash Art, among other publications.