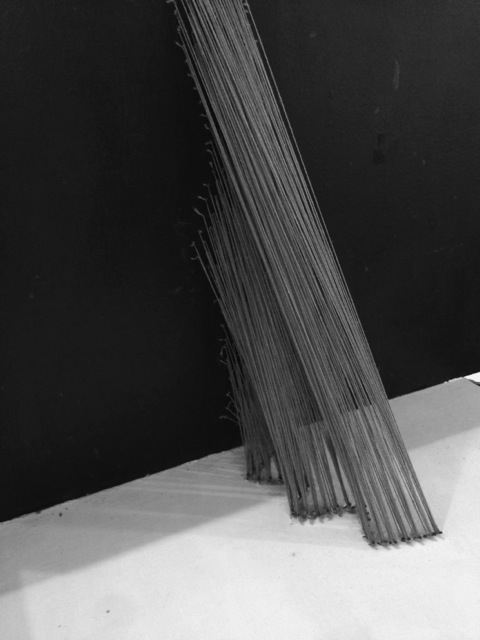 INVISIBLE-EXPORTS is proud to present a solo exhibition of work by Kazuko Miyamoto.

Miyamoto is a preeminent feminist figure of minimalism, and a pioneer of a new and radically warm brand of rigorous abstraction, introducing handmade, irregular, and intimate elements that both modulated the movement’s unforgiving visual language and advanced it, by critique.

Born Tokyo, Japan, Miyamoto moved to New York in 1964, studied at the Arts Student League, and soon became assistant to Sol LeWitt, whom she met when a fire alarm called them both out of the Lower East Side building in which they each, along with several other artists at the time, kept a live-and-work loft, and whose open cube sculptures and early wall drawings she helped produce and execute.

In her early work, (between 1968 and 1972), Miyamoto was primarily a painter of large-scale bichromatic multi-media canvases, works that inflected and, in some ways, undermined formal systems with modest, organic painterly elements. One series recalled the Japanese board-game GO, with warmly contoured circles spaced out over a spindly grid; in another, the conceit was reversed, a honeycombed out-of-focus lattice structure overlaid with a cleaner lattice, as ethereal as a projection. In each, Miyamoto offers both compositional systems that would satisfy the strictest dictates of orthodox minimalism and others that transport the work, and that whole reductive imperative, into an entirely different realm, in which compositional systems are not demonstrations of mastery but showcases of struggle with form, given meaning by the unconforming and unassimilable elements. In these works, the failure to comb out resistant expressive gestures is not just an aberrant and transfixing painterly fact but no kind of failure at all.

In 1973, the year of her first gallery shows in New York and Italy, Miyamoto embarked on a major nail-and-string wall-based installation in MoMA’s private employee eating area—the elegant, path-breaking site-specific work which she had been refining for several years as she moved away from painting, and would become her signature work between 1972 and 1979. (The museum would acquire two works by Miyamoto over those years.) In these sculptures, she distanced herself from the assertive, masculine works of her contemporaries, embracing ephemeral materials and staging apparition-like site-specific and purposefully imperfect installations that shaped and responded to the physical conditions of the given space and seemed also to embody a certain temporality—each work’s evident meticulous assemblage as striking a quality of its work as its handmade, human-scale aspects.

“Kazuko is showing recent work at 55 Mercer May 12 through May 30,” she wrote in a memorable all-caps typewritten press release for the first exhibition of these works. “Kazuko create linear system by extending string between nails on wall. These materials and lighting form an area of sensitivity and spaciousness. The most beautiful is to have nothing on the wall, the second most beautiful is to have line on it, and then the third is to break the wall.”

But she was simultaneously returning, and more strictly, to the surface of the wall, with a series of what she called “string construction drawings” that fell somewhere between studies and stand-alone works, some conceived as meticulous conceptual systems through which to assemble realized projects, and others produced as fully-realized, even more perfectly realized, projects themselves. Eventually, she came to extend the wall-based nail-and-string sculptures out into three-dimensional space, exquisitely torqued sculptures-by-filament that almost breathed in the available environment, and which mixed elements of drawing and sculpture, of weaving and of architecture, the handmade and the abstract—”eloquent demonstrations of the capacity of sculpture to possess environmental space, insistently but without overemphasis,” as ICA and Guggenheim curator Lawrence Alloway wrote. “Hers is a subtle but implacable art.”