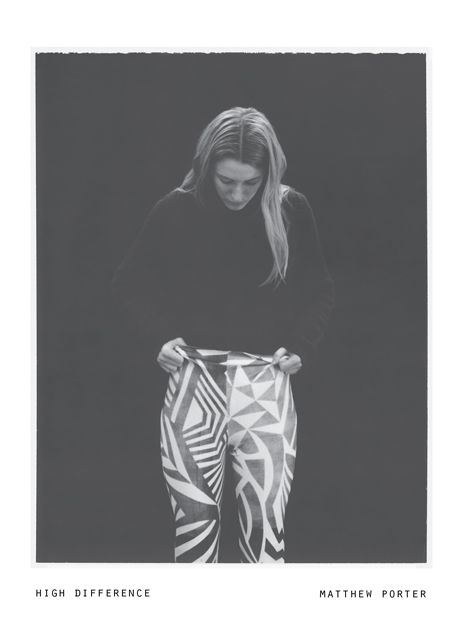 INVISIBLE-EXPORTS is proud to present the second solo exhibition at the gallery of new work by Matthew Porter.

Presented here is a selection of multiple-exposure still-life images, a landscape, and a studio portrait. The title refers to a style of camouflage that works against the notion of low visibility. Decorate an object with vivid, abstract shapes and contrasting tones, and it will be more difficult to discern its size, direction, and distance—facts that are crucial to a submarine crewmember looking through a periscope. The theory is still controversial after almost 100 years since its widespread use on allied ships during WWI.

Once you can pinpoint objects on a screen, high difference camouflage is of little value.

Do a Google image search for the word “Knoll” and you’ll eventually find pictures of an old Maryland lighthouse, officially named the Seven Foot Knoll Light. Its body is an inelegant squat circle, a disk with thickness, like a core sample. Snatched from its original perch, a rocky outpost at the mouth of Baltimore Harbor, it now sits at the end of a pier, as part of the Baltimore Maritime Museum. Obsolete and inoperative, tourists climb its stairs to view a limited archive of coastal ephemera.

Once you can pinpoint objects on a screen, a lighthouse is of little value.

In 1908, Matisse reflected in a written apologia that he had failed to link his technical ability to any particular conceptual conceit. In his own words, his paintings did not “go beyond the purely visual satisfaction such as can be obtained from looking at a picture.” Taken out of context, this statement could erroneously give the impression that Matisse believed his paintings to be merely meretricious decorations, yet it would be unfortunate to traduce them using the Marxist belief that the economic and political conditions of an artwork’s production should subjugate its aesthetic properties. His work contains some of the early provenances of modernism—pictorial compression of space and a nagging anxiety about a shifting cultural identity—despite the perception of his Fauvist, bourgeois complacency.

Matthew Porter (b.1975, Pennsylvania) received his BA from Bard College in 1998 and his MFA from Bard-ICP in 2006. Porter was profiled in The New York Times and included in the “After Photoshop” exhibition at the Metropolitan Museum Art (New York, 2012), as well as the International Center of Photography Museum’s “Perspectives 2010.” Recent exhibitions include “Greet the Dust” at M+B (Los Angeles), and group shows at Frank Elbaz (Paris) and Koenig & Clinton (New York). Porter’s curatorial projects include “Seven Summits” at Mount Tremper Arts, “The Crystal Chain” at INVISIBLE-EXPORTS, and “Bedtime for Bonzo” at M+B, which was an ARTFORUM Critics’ Pick in 2011. He is the co-editor of Blind Spot magazine Issue 45, and his writings and interviews have been featured in Triple Canopy, Blind Spot, ARTFORUM.com and Canteen. Porter teaches part time at Parsons The New School for Design in New York, and his work is included in the permanent collection of The Metropolitan Museum of Modern Art. Porter lives and works in Brooklyn, New York.