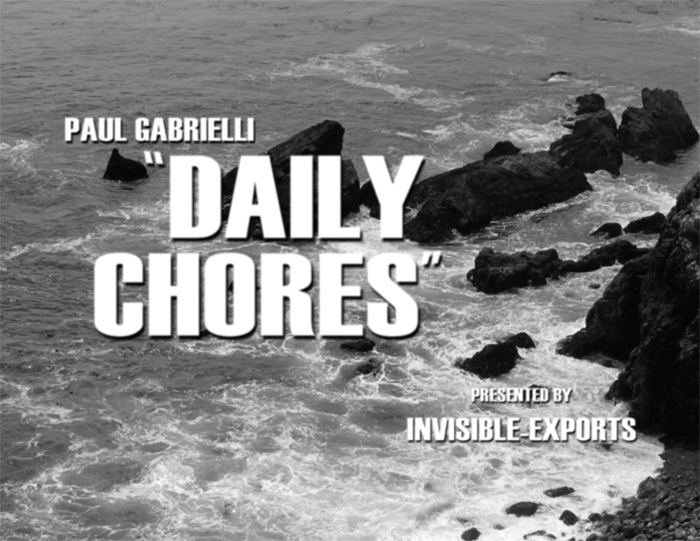 For Daily Chores, Paul Gabrielli has made a series of deconstructionist sculptures, each composed of “everyday objects” that are themselves in fact a characteristic combination of altered, manipulated, and meticulous hand-made elements.

In one work, a shower curtain is locked to the wall – a picture of negated privacy in which the space remains permanently open. The work is at once both secured into the pictorial plane and open into a suggested physical realm. It is a sculptural double exposure laid bare—a nude nude. These are spaces that invite entry, but to which physical access has been denied—portals that are treated themselves like objects and evoke the imaginative depth of closed-off space.

The padlocks in Gabrielli’s sculptures call to mind the private life of quotidian objects—the locks are a recurring motif, and each performs as a focal point, drawing attention almost like a flashlight in a dark space. The doormat, the most recent work in the show, is a three-dimensional portrait of control. A void is suggested by the field of blue, the ocean, the sky, with the chain performing like an anchor, suggesting a longing for security, protection and safekeeping of the private specialness of an otherwise replaceable object. At the same time the Chain here is cutting the doormat in half; again, the sculpture is compromised. As viewers, we are locked into a conundrum, where confinement and liberation, romance and the mundane, partake in a mis en scene, suggesting that in the dreamlife of objects, as elsewhere, constrain may be a form, or condition, of freedom.

As in all of Gabrielli’s work, his trompe l’oeil sculptures with jewelry and sponges are assembled from appropriated and reconstructed found objects. But these works are compiled not from generic images, made personal by refashioning or repurposing; but from talismanic elements from which memories and associations seem to resist being fully erased or polished over. The sponges are mounted on tracks, which imply movement of a particular, linear (even repeated) kind, and, with the jewelry, give the sculpture the trace of human touch, a palpable memory somehow disembodied, like a daydream paused.

Paul Gabrielli (b. 1982) is a New York based artist whose work has been exhibited in institutions and galleries both internationally and domestically, including the Cartier Foundation, Paris; 303 Gallery, New York; Eleven Rivington, New York; and the Verge Gallery, Sacramento. His work is included in the permanent collection of the Cartier Foundation. His work has been featured in ArtForum, The Paris Review, Art Review, Mousse Magazine, City Arts, among others.