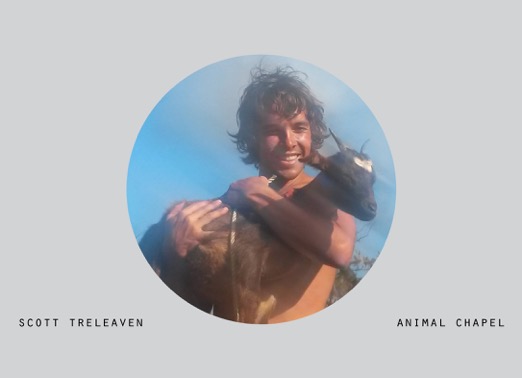 INVISIBLE-EXPORTS is proud to present, Animal Chapel, an exhibition of new work by Scott Treleaven.

Scott Treleaven first came to attention two decades ago as a contributor to the North American gay punk scene, known for his collages, films, and zines. Over the last five years, Treleaven has produced a new body of work composed of large cell-like drawings, reminiscent of film-frames and produced through techniques culled from ritualism and automatic writing, while pointedly retaining aspects of an obscurantist archival collage process. Treleaven’s embrace and appropriation of painted structures and geometries that imply ideas of motion, harmony, mortality, and conflict, are layered directly on top of collage, creating palimpsests of abstraction over hidden elements. It is a body of work that has evolved into an oblique tribute to the critical function of fringe and marginal cultures; a nod to hidden histories, and to an intimacy, and immediacy, unique to drawing.

As with all of Treleaven’s work, materiality is paramount. The black gouache is made to perform contradictory duties: allowing the viewer to enter into the work, while raked light divulges a multitude of revisions just beneath its surface—revealed only as the viewer shifts their gaze. Some of his compositions spring directly from cult or fringe religious iconography (often mimicking what mystical, utopian, or totalistic art is meant to look like), while others allude to horror films and occult B movies, cinema being an unmistakable influence. Even with these meticulous strategies, the work retains a purposefully rough and spontaneous aspect, suggesting an ideal of unrest or unreason. Showing in the marks is an artist’s intimate experience with a range of expressions and outputs (zines, collage and super8 film), all of which retain their vitality by limiting the elements of process and production.

While the idea of drawing and notation (literally, marking time) unifies Treleaven’s practice, the work also puts forward a fairly radical theory of abstraction in art history—that, despite a contemporary Greenberg-ian bent toward “meaningless” abstraction (which has insisted its way into art history textbooks over the last half-century), the flight from expressionism to abstraction was driven by a very focused inquiry into consciousness and mysticism (by Kandinsky, Mondrian, and others). This “other” abstract lineage was picked up, in Greenberg’s own time, by proponents of Beat culture, anarchists, psychedelic explorers, and elaborated on further by artists like Keith Haring. Treleaven’s new drawings continue to explore the possibility that abstraction is not an autonomous tradition. Using panels scaled in proportion to the human body, the works are rooted in meditations on the fundamental strangeness of being flesh and blood, a physical entity containing consciousness. The seeming straightforwardness of the markings suggests a project animated by mysticism and yet devoted, ultimately, to a very queer kind of demystification.