Sometimes When We Touch 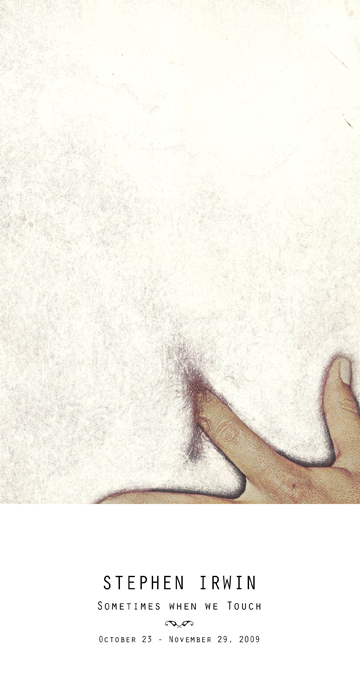 STEPHEN IRWIN | Sometimes When We Touch

INVISIBLE-EXPORTS is pleased to present, Sometimes When We Touch, a solo exhibition of new work by Stephen Irwin.

Irwin can be seen as something of an appropriation artist who doesn’t restrict himself to merely appropriating, a found-object artist for whom the finding is only half the fun. Selecting pages from vintage pornography, Irwin undoes the lusty plastic polish of the magazine, rubbing out the sheen and often much of the image itself, isolating erogenous zones of special interest with the focus of a loving eye. Through a variety of rugged and astringent processes, he softens the blunt sexuality of the found image, abstracting the depicted scene into a vision far more ephemeral and imaginative, censoring much of what might have been shocking about the image in its original form and invoking instead a more suggestive and expansive erotic landscape of tenderness and perversion, intimacy and lust, chastity and lasciviousness.