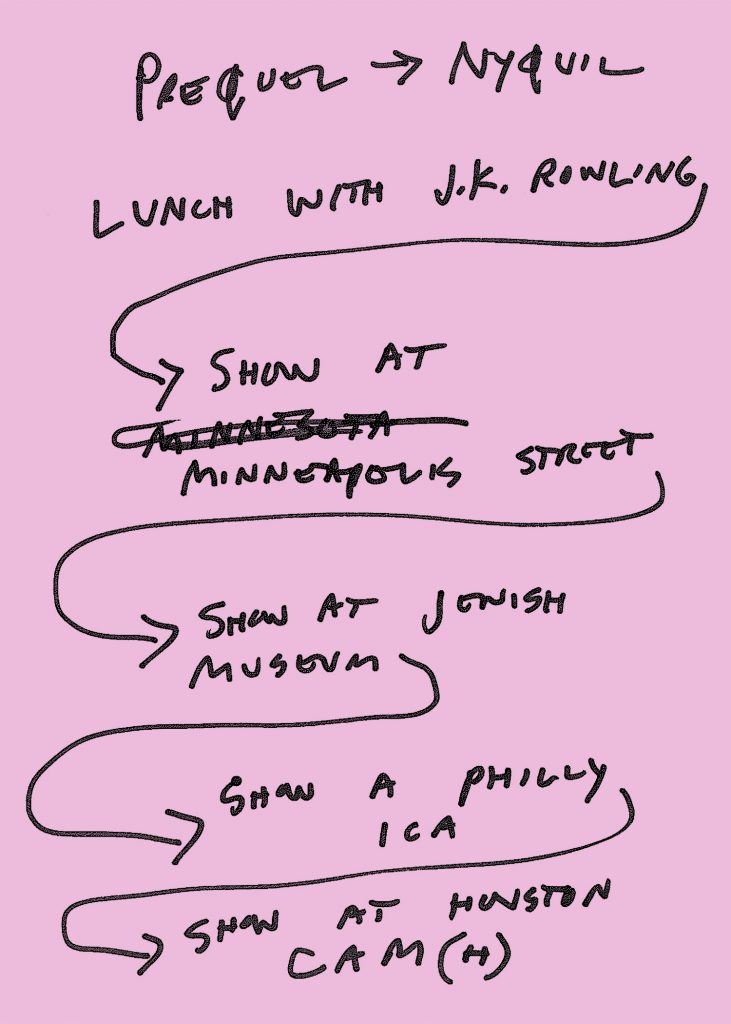 INVISIBLE-EXPORTS is proud to present Prequel Nyquil, an exhibition of new paintings by Cary Leibowitz. The show is concurrent with his career retrospective, “Cary Leibowitz: Museum Show,” which opens at San Francisco’s Contemporary Jewish Museum on January 26, 2017. Prequel Nyquil will open January 12, 2017 at the gallery’s first West Coast pop-up in Gallery 106 at Minnesota Street Project in Dogpatch, San Francisco.

For decades, Leibowitz has been the New York art world’s master painter of abjection and neuroses, with mockingly self-abasing work that mixes elements of therapy, interrogation, social and institutional critique, and stand-up comedy routine. In both his cheeky multiples and his irregular-format paint-on-wood “text” works, Leibowitz turns a critical eye on subjects of identity, modernism, the art market, queer politics, and kitsch—making the gestures and reflexes of self-doubt and social skepticism into pictures of self-awareness as a theater (or satire? Or both?) of radical and universal vulnerability.

Leibowitz first came to prominence in the early 1990s, as Candyass, a prankster-critic of neo-expressionist grandiosity—and one whose self-mocking good humor belied a universe of anxiety below the surface, particularly as the AIDS crisis devastated both New York and San Francisco. (As critic Hilton Als has pointed out, his nickname was “yet another means of deflecting criticism.”) With uproarious text paintings of self-lacerating one-liners, typically composed against pastel-colored wood “canvases,” Leibowitz was celebrated as a wry and disconsolate Abject Art witness to the new pop-spectacle of the later 1990s and 2000s. But his work was also and always deeply personal and idiosyncratic, driven by anxieties, neuroses, and premonitions of difference that transform self-doubt and social skepticism into something much larger than niche art-world critique. That is, a heartrending and intimate meditation on our inescapable secret doubleness—the debilitatingly self-aware conscience that lies always beneath, or behind, or just around the corner, with a mocking and knowing wink.

“By making failure, particularly personal failure, his medium and showing particular preference for the lowbrow, the pathetic, the inexpensive, the throw-away,” the museum notes in its show announcement, “Leibowitz throws post-modernism’s slick critique of modernism into harsh relief.”

Prequel Nyquil showcases a number of new “text” works and also debuts a new series: paintings featuring selections of mittens that radiate outwards from the edges of each “canvas.” The mittens draw their own texts from the familiar word world of his paintings; self-deprecating “self-portraits” (Fatty McL, Worlds Best Fried Chicken, and Yuno Whozitz Jr.), his favorite actress (Greta Gerwig), and the only newsperson he trusts (Rachel Maddow), among others. They are formal and unsentimental in production, but sappy tributes to the terrific characters among us. Once again, the work reminds us that abjection for Leibowitz is something of a perpetual state—and sometimes a tortured strategy of ingratiation. A morose declaration of independence from a self-congratulatory marketplace, a retreat into self-critique as a break from self-promotion, self-loathing may not be the defeat that our self-help everything-is-sunnily-for-sale culture insists it is, but a vital platform for criticism both within and without. And also, you know, where everybody lives all the time anyway.

Cary Leibowitz (b. 1963) also known as Candyass, has exhibited in museums and institutions across the globe including the Jewish Museum, New York; the Indianapolis Museum of Art, Indianapolis; PS1 MoMA, New York; to name just a few. His work has been reviewed in the New Yorker, Artforum, The New York Times, Frieze Magazine, Art in America, among others, and is included in the permanent collection of the Chase Manhattan Bank, the Hirshhorn Museum, and The Jewish Museum in New York.